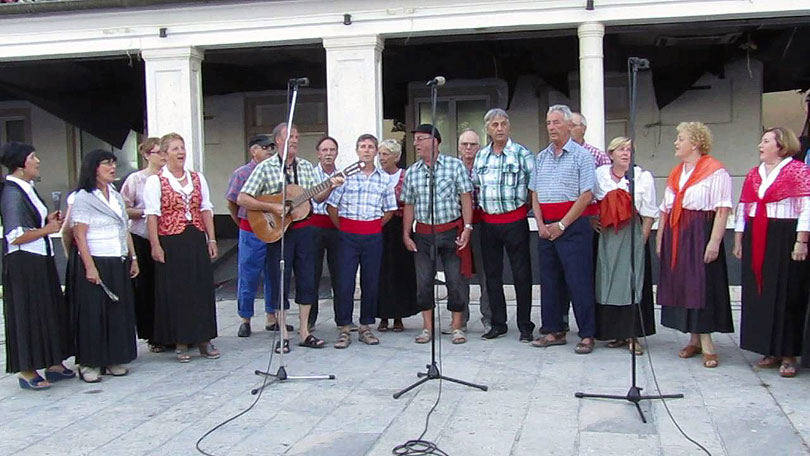 “Bitinada” – is a vocal support (a capella) for soloist that sings the lead theme which gives harmony and rhythm. About ten members of group called ”bitinadora” sing songs in that fashion.

Did You know that: The way these songs are sang enabled fishermen to work and sing at the same time.

Their arms were free for their nets and other fishing tools because there were no instruments used.

Some of them would hold accord and rhythm (“tan-tani”) imitating guitars with their voices while others (“tin-tini) improvised countermelodies and decorative elements imitating the sound of mandolins and violins.

Basses use “von” sound imitating contrabass, underlining harmony and rhythm. As a writer from Rovinj, Giusto Curto once wrote, “…it sounds enchanting, as if you are listening to a magic orchestra without conductor” (“orchiestra magica sensa maiestro”).

Bitinada – as a form of Rovinj folk song

Ancient meaning of this song comes from the Serenade of musical instruments that accompany a solo voice.

Bitinada sung in Rovinj is a form of folk song in which singers replaced the accompanying musical instruments with the kind of rhythmic syllables onomatopoeia that form the basis for the harmonic and rhythmic singing of the soloists. This unusual sounds characterize and give the name bitinada.

Texts of songs, mostly by anonymous authors are sung in Italian, while the songs of the twentieth century, are from local authors, in fact in recent years, generally are in Istriot (Rovinj dialect).

A significant mark in their 30th-year of the last century has left the two choirs of Rovinj Tobacco Factory, which is coordinated by Giovanni Pellizzer.

Church of the Holy Cross