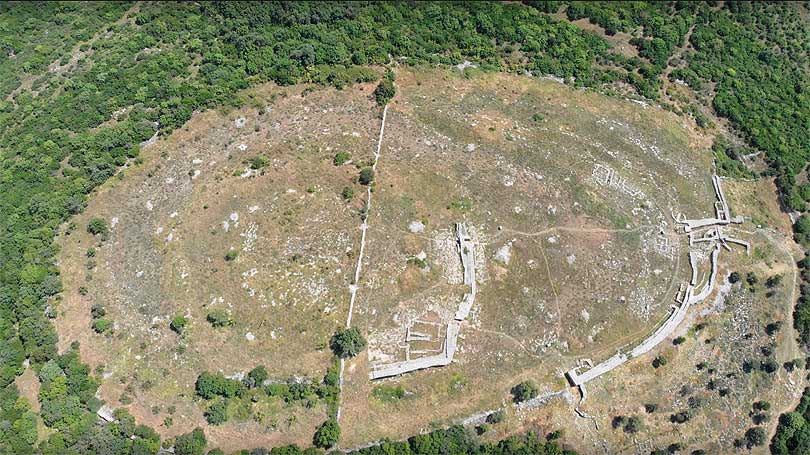 Monkodonja, also known as „The Mikena of Istria“ – is an archeological site from the bronze age (about 1800 before the new era) and it’s situated on a hill, five kilometers south-east of Rovinj (Croatia).

The settlement has an oval layout and consists of an acropolis and upper and lower town. It’s assumed it could have been counting around 1000 inhabitants.

The upper town was meant for artisans while the lower town was intended for agriculturists.

The main entrance in Monkodonja is a small door on the west side looking down to the sea, while the second one is located on the northwest side of the site.

The acropolis was situated on the top of the hill, additionally protected by rectangular formed walls. Its a known fact that the acropolis was intended as a place for the rich residents of Monkodonja.

The houses distinguis one from another by different ways of building and size and were separated by streets and small passes. Many ceramic fragments that were found on the site were made by local artisans but some came from the eastern Mediterranean with characteristics of the Mycenaean culture.

Also, there have been found numerous metal objects, which proves that the site was inhabited by wealthy people.

The inhabit in Monkodonja ended suddenly around 1200 before the new era by unknown reasons.

Monkodonja – as an outstanding historical and archeological site, was listed on the map of important cultural destinations of the Istrian region.

South-east of the fort Monkodonja, only 500 meters by air route, there are placed the burial tumuli MUŠEGO, layed out by large stone blocks. In the middle there is a carefully cutted panel stone chest containing amber, faience pearls and bronze jewelry, aswell.

There has been found 11 tumuli and its believed that they had been the main part of the necropolis. Every single one has been built up in a different way, and they are also different from any other tumuli in the region of Istria.

Its important to say that there have been found human bones and two adult human skulls – one of a child which were placed in a cramped position. The tombs were later robbed by “hunters for gold”.