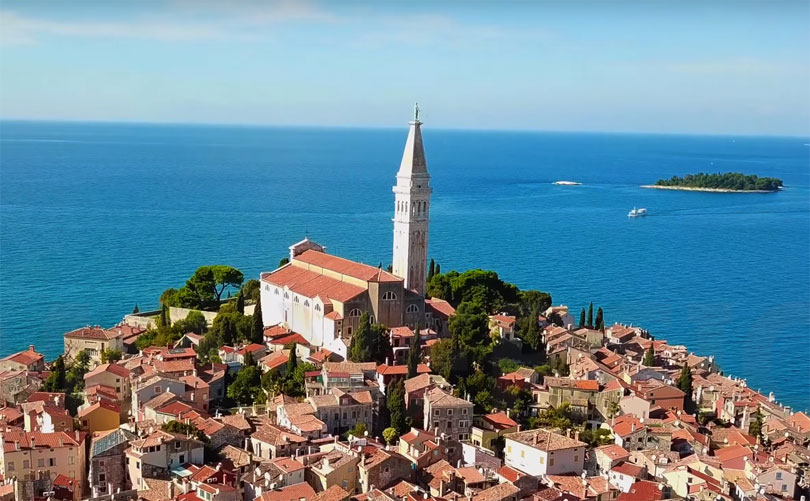 At the site of the present Church of St. Euphemia was once situated the church of St. George. As the city was developing the church has become too small and during the time on the same site was built and larger churches.

With the completion of the church 950th In the middle is placed the coffin with the body of St. Euphemia, who became the patron saint of the city. (The legend of St. Euphemia).

Only the 1720th in Rovinj, the city council decided to build a new church.

After the project architect Giovanni Scalferottoa not accepted, hired another architect Giovanni Dozza. How to build a new church were destroyed three previous: S. George, vol. And St. Ursula. Michael. 1725 years is set and the foundation stone, and was finally completed 1736th Year.

It was built in Baroque style and the tower with a statue of St. Eufphemia height of 61 meters was built on the model of the church tower of St Mark’s in Venice.

At the top of the tower and is now home to a statue of St. Euphemia the wheel. Originally it was a wooden statue that in 1756. struck by lightning. 1758 set a new statue.

It is interesting to him in 1936. In a military aircraft crashed and returned two years later. 1993rd In was removed in order to be restored. Pedestal of the statue allows it to rotate in the direction of the wind, so depending on which direction oriented shows and meteorology conditions in Rovinj.