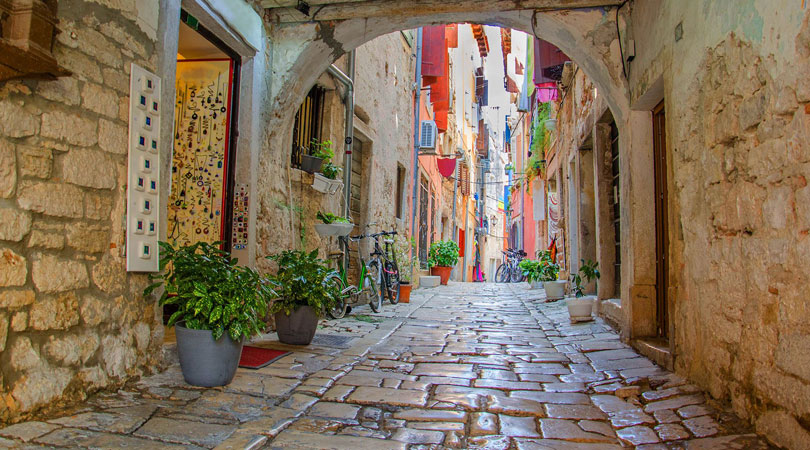 Rovinj has always been recognised by its Old Town centre – the roots of which go back as early as the 7th century BC.

Seemingly climbing out of the sea, this is a mountain-isle densely interspersed by apt medieval architecture, dominated by the Baroque and Renaissance styles.

The greatest achievement of its density is however ascribed to Baroque; several centuries of medieval measures started to prove too narrow for the ever increasing influx of population from the outside, thus making the centre wider and wider.

Did You know that the Rovinj Old Town – is historical monument of the highest category protected by UNESCO.

At the top of this pyramid-shaped architectural structure – Old town of Rovinj, one finds the monumental Church of St. Euphemia dominating, built in the Baroque Venetian style dating back to the 18th century.

It is simultaneously a valuable cultural and historical sacred object and the unavoidable tourist attraction for numerous visitors. What makes it especially attractive is the belfry, sixty metres high, with its copper statue of the saint at the very summit, which is turned around its axis with a little help from wind.

The medieval island of Rovinj, encircled by walls, had seven gates. The main town gate was at the place marked by an ornamented arch today – known under the name of the Fishermen Gate. The gate was destroyed in the late 17th century, after which the arch was erected, known since as the Arch of Balbi.

Grisia – is the longest and most famous street of the Old town center of Rovinj, also the one with most steps. It connects the foothold of the town at its end and its summit.

It is somewhat of a unique opportunity, for one can find exhibits by participants of all generations and status there, which includes children’s, amateurs’ and established degree painters’ exhibits.

The initial Rovinj successfully withstood land until the 18th century, or more precisely – until 1763. When the threat of invasion receded, the sea moat that made the town an island for centuries was covered with land, which established an artificial bridge between the Valdibora bay on the northern side and the small port of Sv. Katarina on the southern, known today under the name of Marshall Tito Square, the central town square.

In terms of sacred objects, apart from the St. Euphemia church described above, the Trinity Chapel stands out, shaped in the heptagon form and dating back to the 12th century, which is also the best preserved Romanesque monument in the Old town centre of Rovinj.

Villa Rustica is also included among the top category of objects, located at the Crveni otok (Red Island), and dating back to Roman times.

Today it is partly a museum, and partly a restaurant with the unique atmosphere and an excellent offer of dishes.

Once the island, today a peninsula on which is built a small fishing town surrounded by walls which have survived many attacks.

From 7 city gates, three have retained their original shape: Doors St. Benedict (now the door on the coast), the gate under the wall and the gates of St. Cross.

At the point where they are situated – once there was the old fish market thats now home to a Baroque BalbiˈArch, named after Balbi, the then mayor of Rovinj. At the top there is a lion with an open book (the lion is the symbol of a Venetian republic and the open book show the fact that Rovinj, without war, accepted control of Venice).

Passing through the door on the left side there was the former town hall (now the Municipality of Rovinj). A little further after a small square (Piassa Grande) comes to Grisia main street that leads to the top of the old city, or to the Church of St. Euphemia. Baroque is a style of its bell tower on the top a statue of the patron of Rovinj St. Euphemia was built on the model of the church of Sv. Mark’s in Venice.

Passing through the Rovinj Old town and its narrow streets you will see many passes, porch, picturesque small squares, the Romanesque-Gothic windows and balconies, as well as the Renaissance town house.

On the north side there is a street Vladimir Švalbe which connects the south side of the street St. Cross out by a large pier to the main square.

Town square or square Marsala Tita is the main venue for events and concerts. In the middle is a fountain next to the town clock.

Inside, the most famous Grisia there are Trevisol, Monte, Montalbano, cam, etc.

Grisia is full of small galleries and each year (since 1967.) there is held an exhibition in the open.

Rovinj has around 15.000 inhabitants and most of them are largely engaged in tourism, in the fishing trade, in agriculture, wine business and in viticulture. The town has a rich history, as well as interesting architectural buildings, beautiful natural resources and industrious people who are certainly worth a visit.

Rovinj is also one of the most famous tourist centers in Istria and Croatia, that is attended by many foreign and domestic guests.

The accomodation capacities are diverse, reaching from campsites and private apartments and rooms to smaller board and lodging places and high class hotels.

Some of the sights of the town and its surroundings are described on our web site. We hope that you will like it and that we will see you soon in Rovinj!