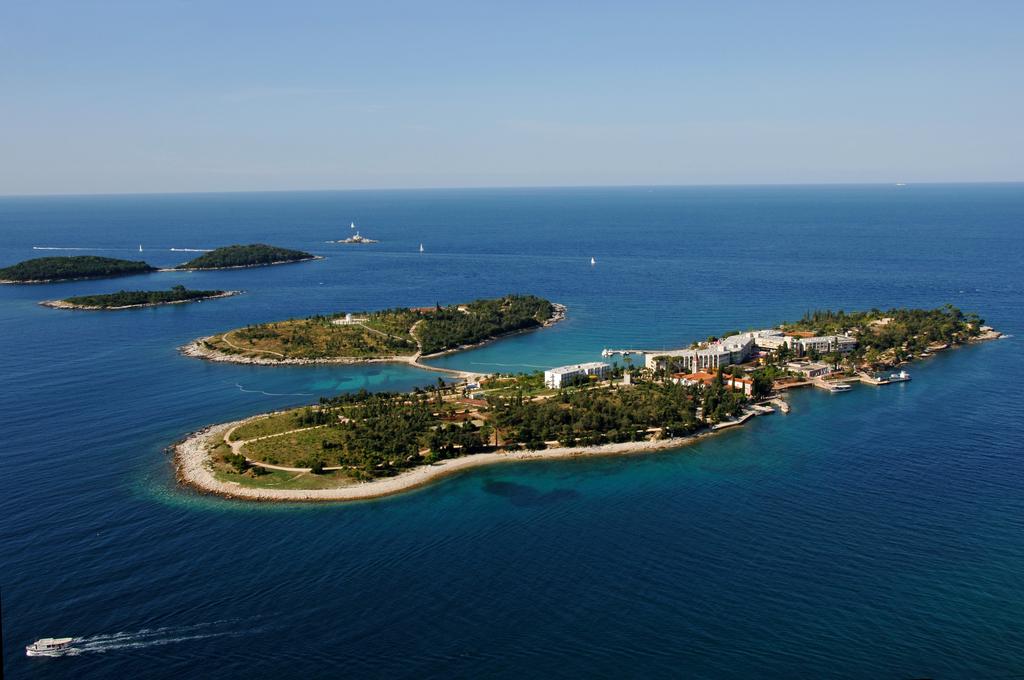 The island is uninhabited and has an area of 0.233 square kilometers. It’s lined up with the island of Maškin, Šturag, Saint Ivan, and Saint Ivan on the Horizon – what proves that once it was part of the mainland.

It is very interesting that many couples from all over the world has chosen Red Island as their wedding place so its fair to say that the Red Island has also became a popular wedding destination.

How to get to Red Island (Crveni otok, St. Andrew)

Red Island is located south of the city of Rovinj – only 15 minutes away by boat, starting from the city boat dock on the main Rovinj square or the smaller dock by the “Delfin” pier.

From the Delfin pier, the boat departures every hour, starting from 5:30 h in the morning to 0:30 h in the evening.

For more detailed information You can search for the information stand on Delfin Pier in the city of Rovinj, where the staff will provide You all the necessary information about the boat transfer to the Red Island.

Its important to state that for the Island Hotel Istra guests, the boat transfer from Rovinj to Red Island and vice versa is free of charge.

No matter the fact that the Red Island is considered uninhabited, during the summer months its possible to find accommodation in the only hotel on the island of St. Andrew – Island Hotel Istra.

This hotel is a real gem among tourists in search for a relaxing vacation beacuse its offer a wide range from comfortable accommodation, amazing wellness & Spa facilities spread over 1600 square meters to amazing beaches and nature.

On the island there are one pizzeria, five restaurants and four bars in total.

This hotel is awarded with a „Special Hotels of the World Award“ – an award limited for unique, special and first class hotels all over the world.

It is also very suitable for families with children because it provides many children animation programs and has many facilities for children such as a large pool complex, baby club, teen club, inside / outside children playgrounds.

The known fact is that the first inhabitants were the Benedictine monks who came to the island in the 6th century and stayed till the 13th century.

It’s assumed that the Red Island was settled in prehistoric times.

During their stay they built a church and founded a monestary. Even today, there are visible remain of the church – the central part including the dome and the walls built in the shape of a Greek cross.

There was an oil mill and a cement factory on the island till 1890-91 when the Baron Georg von Huetterot (back in 1891.) bought the whole island.

He filled the island with soil, planted many different sorts of trees and rearranged the monastery into a family summerhouse or castle.

Baron Georg von Huetterot fulfilled the castle with artworks which remains are exposed in the town museum in Rovinj. The preserved section of the castle is today a small naval museum and can be visited by an arranged announcement.

The Huetterot descendants lived there till 1945 and then the island became a social property and repurposed for tourism. Hotel Istra was built In the 70ies as tourism reaches it’s full swing.

There is a Huetterot family mausoleum located on the Maskin Island, right on the location where once was sitauted an old Histrian gradina (fort).

Extra tip: Read more about The Castle on the Island of Sv. Andrija.

Red Island offers mainly gravel-mixed stone beaches popularly called peebly beaches. Southern side of the island (near the Island Hotel Istra) features a peebly beach marked with a Blue flag mark which means that the quality of the sea on that specific beach is outstanding.

Also there are many beach facilities such as bars, restaurants, showers, dressing cabins, toilets, different rental facilities (rent a boat, rent a pedal,…) and children playgrounds. The gravelly and rocky beaches on the southern side give a special charm to the whole island.

On the the western side of Red Island you will find several higher rocks favorable for jumping into the sea. For FKK (nudists) fans there is also a beach intended for nudism.

In case You have a boat or You rented one, near the Island Hotel Istra there is a little dock featuring the possibility of boat mooring and achoring.

There is something about Red Island which causes a special feeling among its visitors. Along the whole islands there are numerous paths and walkways decorated with conifers, flowers and pines providing the visitor a special charm and scent of a true Mediterranean.

During the walk, the visitor can rest and sit on one of the many wooden beaches located throught the whole island.

It is well known fact that today, on the Red Island there are more than 180 species of plants growing. Many of them were planted by the Hutterott family, back in the 19th century.

Back in 2002., exactly 14th July, there was a large tempest and a sea leech around Red Island which caused the 90 % destruction of a hundred years old pine forest, especially on Maškin Island.

On the island there are many animal species living, such as lizards, seagulls, pheasants and others.

Confirmed by the Croatian Society for Natural and Energy Medicine, the Red Island, specifically Maskin Island features a special king of positive energy. For that reason along the island there are situated several energy circles made of stones which allow the visitors to meditate and relax.