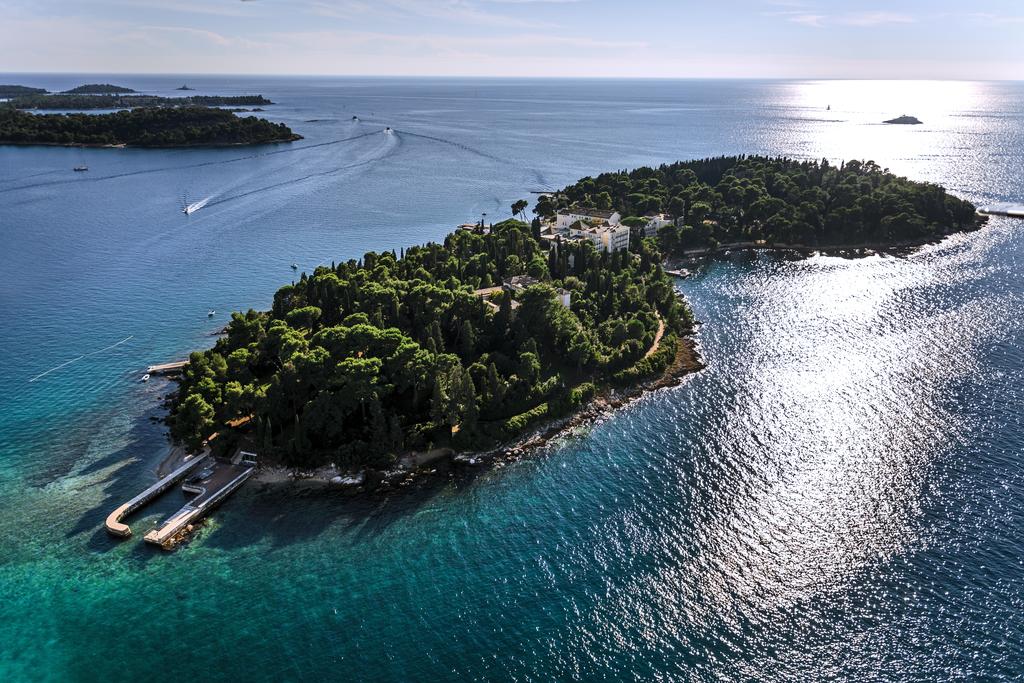 The island of Sv. Katarina (St. Catherine) is located on the south side from the city of Rovinj, just 5 minutes away by boat – starting from the Rovinj Old town or the pier Delfin. It’s the second biggest island in the Rovinj archipelago with an area of 130.000 m2.

From the island You can enjoy an amazing view of the Rovinj Old city center and the predominant Church of St. Euphemia.

The Sv. Katarina (St. Catherine) island is well known for beautifull parks, gardens and vegetation richness. There is possible to find more than 450 different species of plants and trees – with predominant conifers.

Also, very interesting are the plantings of oleander bushes situated all along the paved paths to the beach. In the center of the island there are vineyards and some olive trees.

The beaches on Sv. Katarina (St. Catherine) island are mainly located on the east side of the island. These are small rocky and sandy bays with a view on Rovinj and the peninsula Golden Cape (Zlatni Rt).

On the southwest side of the Sv. Katarina (St. Catherine) island there is a 20 meters high cliff called Zlatna Stijena (Golden rock). Slightly lower there is the Srebrna Stijena (Silver rock) and on the end you can find the Brončana Stijena (Bronze rock).

These cliffs if are a challenge for jumpers and the place where only the bravest try their jump acrobatics.

The islands historic development started by the end of the 19 century when the Austrian Archduke Karl Stephan bought the island. Back in 1905, St. Katarina Island became property of the polish Count Ignaz Milewskog who tried to arrange the environment competing with the owner of the island Saint Andrija (Red island) – Count Huetterot.

Milewsky had the island filled up with earth and plants. The paths have been paved and four piers for ships have been build. Milewsky also brought tanks for rainwater and a built a luxurious castle on the lowest spot of the island.

There are not many remains from that times and the castle has been rearranged several times.

Today the island of Sv. Katarina (St. Catherine) has a hotel with many different facilities. The Island Hotel Katarina features accommodation in 110 rooms and 10 suites in total.

It offers various sports activities such as tennis, ping pong, beach volley and mini golf. There is a swimming pool for children and adults.

If You are thirsty, You can refresh yourself in the 3 islands bars: the Pool bar, Blue bar and Lobby bar. For gastronomy lovers there are 2 restaurants on Sv. Katarina Island offering tasty dishes – The Hotel restaurant (located in the hotel) and the Bistro Plaža (situated near the beach and sea).

How to get on Sv. Katarina (St. Catherine) island

Getting to Sv. Katarina (St. Catherine) Island is possible by an organizated five-minute boat trip which departure every full hour (5.30 a.m. and 00.30 a.m) from the „Delfin“ Pier located on the Rovinj waterfront.

For more information there is an information kiosk near the Delfin pier in Rovinj, just next to the roundabout. Its important to note that for the Island Hotel Katarina guests – the boat transfer is free of charge during the guests whole stay.