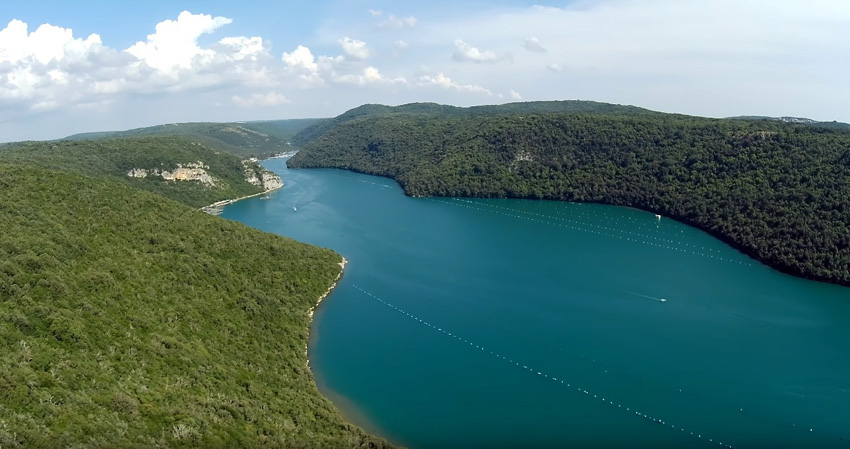 On the west coast of Istria near Rovinj, there is a deep sea bay called – Lim Fjord, Lim Bay or Lim Channel. Lim Fjord represents a flooded canyon valley in the karst.

Its length is about 10 km, its average width is about 600 m and its maximum depth at the entrance is 33 m. Due to many submarine springs, the sea is reduced in salinity, and at the very top is almost sweet. Salinity varies with year and with depth. The sea is less clear in the bay, indicating the richness of plankton.

There are very marked temperature differences in the sea. Special features of the marine environment of Lim fjord provide the conditions for the lives of many marine flora and fauna.

A special feature is the wealth of quality fish species that reach in the winter mothes inside the Lim Bay. The protected area of the Lim Fjord is 429,508 ha.

The name „Lim“ comes from the Latin word “Limes” – which mean frontier (in Roman times there was the border separating the province of Italy with the Dalmatian one). Today it is simply called Lim Channel or Lim Fjord. In the period before the new era, the Lim fjord was inhabited by ancient Illyrians.

It has been called „fjord“ when the movie about vikings “long ships” was filmed there in the 60ies. For the needs of the movie there was built a viking settlement, which was a touristic attraction but eventually it was got demolished.

Limski Fjord (Lim Bay or Lim Channel) is one of the most important natural and cultural sites on the western coast of Istria and is highlighted as a significant entity whose identity and existing ecosystems need to be preserved.

Lim Fjord is the only undeveloped and still natural part of the coast on the entire western coast of Istria. It is characterized by its exceptional beauty and landscape imagery. As we stated before, the fjord itself is somewhat longer than 10 km, depths up to 33 m, and the widest part is 600 m wide. The canyon height reaches 150 m altitude.

The canal is laid in the east-west direction while its slopes are laid in the north-south direction. The sloping slopes range from 20 to 30%, which falls into steep slopes, and the wider area abounds with peaks reaching up to 300 meters above sea level.

A significant number of caves (20) and other geomorphologic sights emerge in the catchment area. Romuald’s cave needs to be emphasized.

The cave of St. Romualdo from the 11 century is located on the south side of the fjord. Ancient stories says that Romualdo was a loner priest who founded the Benedictine monastery of Saint Mihovil whose remains can be seen above the northern shores of the Lim fjord.

Extra tip: Read more about the Cave of St Romuald.

The stones from the southern part of Lim fjord were used for building the church of Saint Euphemia in Rovinj. The cave can be visited with an organized tour.

The deep and narrow, Lim channel is an obvious example of a flooded river canyon valley in karst, which was shaped by the “Pazinski potok” (Pazinčica river) by its erosive power. In the geological past, the waters of Ćićarija flow into the sea.

The Lim Fjord as a special reserve in the sea stretches from the line connecting S.Timple to the southern shore of the Feminum morte on the northern coast of Lim, eastwards covering the sea and the underwater. The Lim underwater area is remarkable by its features.

It is a sunken canyon valley in karst, where by the flow of fresh water it is the sea of reduced sea salt, and at the very top is almost sweet. There is less transparency than in open Adriatic waters, indicating greater bioproduction.

A special feature of sea water provides the conditions for the abundant life of marine organisms (numerous species of fish come here for spawning and wintering).

In the eastern part of the southern exposure bay there was a seabird (Thelygonum cynocrambe L.). This site represents the northernmost site in Croatia, but also the northernmost border of this plant’s site at all. The area of significant landscape includes 883,010 hectares.

Limska Draga is a dry karst valley of wavy shape. It continues on the flooded end of the Lim Fjord (Lim Channel) and thus represents its land continuation.

It is a continuation of the once permanent riverbed of the Pazinčica River, which before the ascension of the limestone Istrian plateau and the formation of the “Pazinski potok” passed east of today’s town of Pazin.

The width of the Limska Draga from the beginning to the vicinity of Kanfanar is approximately 900 m with the trenching at the base of Dvigrad and above Kanfanar at about 600 m.

The height of the slopes is about 150-165 m. The slopes of the slopes vary between 13 and 20 °, with a significant sloping terrain or steep slopes. The terrain gently initially moves in the direction of west-east, and then there is a curve, a change of direction at Kanfanar.

So continuing towards Kringa and Tinjan gets north direction, and around Beram to the northeast.

The bottom of the valley in the upper part gradually rises (160 m to 240 m north of Beram). In this part of the valley, the valley extends up to about 1000 m and re-canyon narrows, ending over Beram in a plateau of about 500 m.

The total length of the limestone harbor from Limski canal to the Beram valley is about 31 km. Physical separation has also become anthropological and socio-historical phenomenon due to the traditional distinction of the mentality of the inhabitants from opposite sides of the deity.